MOS1 is a 9.3 mile section that includes 16 stations, three major intermodal transfer sites and four regional park-rides, which allow for more than 2,500 parking spaces. The first 7.5 miles of track opened to customers in April 2000, reaching Hoboken in 2002.

MOS2 completed a 5.1 mile extension of the system around Hoboken and through the Weehawken Tunnel to an 825-space park-ride at Tonnelle Avenue, making it accessible to an expanding market of auto commuters and extending the southern terminus approximately one mile to 21st Street in Bayonne. This portion of track serves some of the nation’s most densely-populated counties and operates in communities whose residents have a much higher level of dependency on public transit than the average American citizen does. MOS3 consisted of the design and construction of a 4,500- foot long, single track expansion of the line from 22nd Street to 8th Street in Bayonne, NJ. 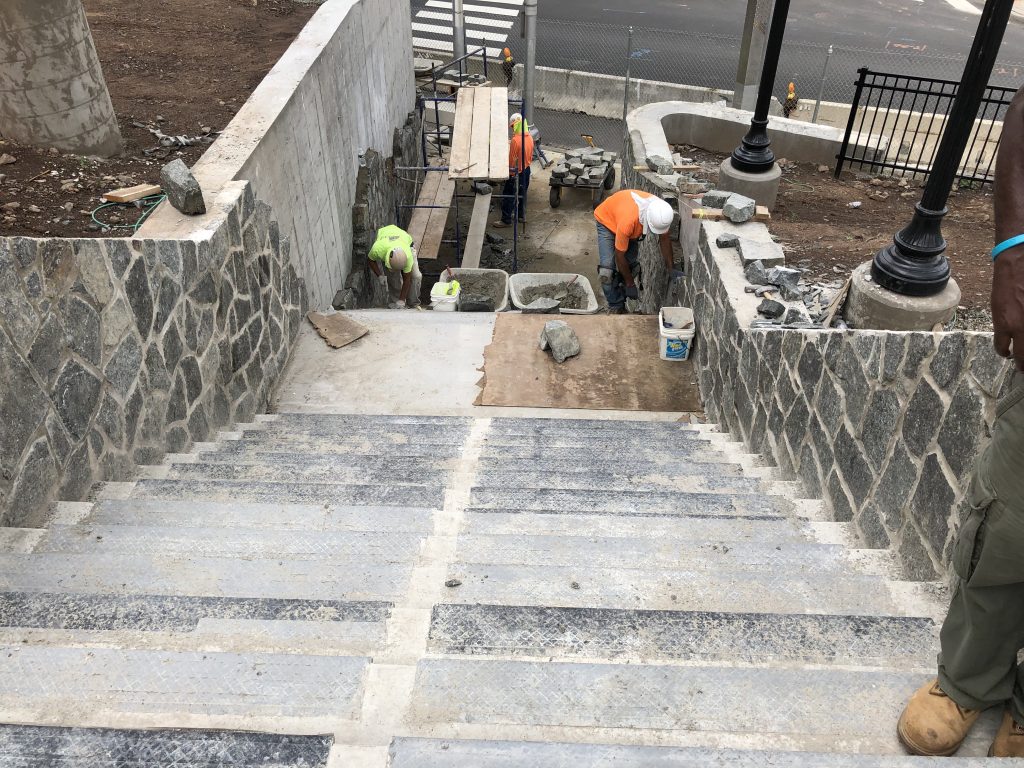 Early construction work at the West Side Avenue Station.

In May 2020, NJ TRANSIT restored service to the West Side Avenue Station, following the reopening of Martin Luther King Drive and Garfield Avenue stations the previous month. Service had been suspended for approximately nine months on the West Side Avenue Branch while the Jersey City Municipal Utilities Authority (JCMUA) repaired a deteriorating sewer pipe that ran directly underneath the light rail tracks.

While this utility work took place, NJ TRANSIT completed early construction work for the HBLR Route 440 Extension Project, including upgrades to the stairs and platform area at the West Side Avenue Station. These upgrades were completed in September 2020 and are in preparation for the future work that will extend the line west 3700 ft. to the new Bayfront Station.

HBLR established this website to keep our customers and stakeholders informed about our System Extension as it moves forward. Please visit the website often for helpful information and updates.

Your participation is encouraged throughout every phase of the project. We encourage your comments and questions and invite you to share your feedback with the project team.