The City of Jersey City is planning for substantial growth along its western waterfront with a mix of new residential and commercial uses on former industrial sites. West of Route 440, a new neighborhood is envisioned, with apartment buildings, commercial spaces, parks and streets. The success of this new development depends on new or enhanced transit service that creates a convenient connection between the western waterfront of Jersey City and existing transit services, including the Hudson-Bergen Light Rail (HBLR). The HBLR Route 440 Extension Project is being planned to provide convenient transit access for existing and future residents of the western waterfront area. 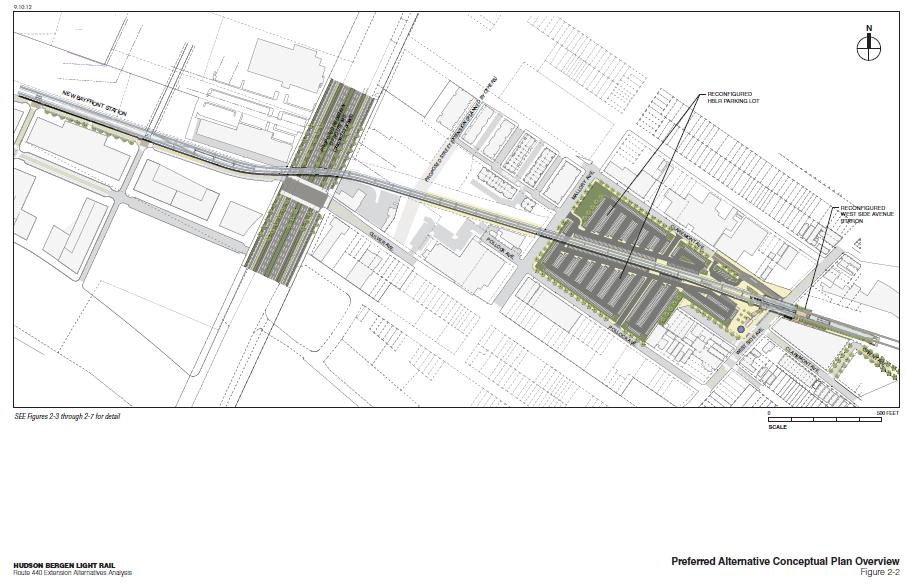 To date, preliminary conceptual engineering has been conducted to create an initial design concept for the extension project. As envisioned, a new viaduct would be extended from the West Side Avenue Station platform across West Side Avenue, through the existing station parking lot and across Mallory Avenue, through the next block and across Route 440. A new terminal station would be created west of Route 440 that would be integrated into the new Bayfront development being planned there.

NJ TRANSIT plans to apply for federal funds from the Federal Transit Administration (FTA). To comply with FTA’s funding procedures, two stages of evaluation have been conducted:

1. An alternatives analysis was conducted that identified possible alternatives to meet the identified need for transit enhancement and then selected a locally preferred alternative, the extension of HBLR service to a new station west of Route 440.

2. Environmental evaluation of the locally preferred alternative in accordance with the National Environmental Policy Act (NEPA). NJ TRANSIT has prepared an Environmental Assessment (EA) to evaluate the potential environmental effects of the HBLR Route 440 Extension Project.  You can access the EA by clicking the links at the top of this page.

In May 2020, NJ TRANSIT restored service to the West Side Avenue Station, following the reopening of Martin Luther King Drive and Garfield Avenue stations the previous month. Service had been suspended for approximately nine months on the West Side Avenue Branch while the Jersey City Municipal Utilities Authority (JCMUA) repaired a deteriorating sewer pipe that ran directly underneath the light rail tracks.

While this utility work took place, NJ TRANSIT completed early construction work for the HBLR Route 440 Extension Project, including upgrades to the stairs and platform area at the West Side Avenue Station. These upgrades were completed in September 2020 and are in preparation for the future work that will extend the line west 3700 ft. to the new Bayfront Station.

HBLR established this website to keep our customers and stakeholders informed about our System Extension as it moves forward. Please visit the website often for helpful information and updates.

Your participation is encouraged throughout every phase of the project. We encourage your comments and questions and invite you to share your feedback with the project team.